Who Is Robert Hooke And What Did He Discover?

Who Is Robert Hooke And What Did He Discover?

Robert Hooke was an English physicist, best known for discovering the Law of Elasticity, or,  Hooke’s Law. In this blog post we’re going to cover everything there is to know about Robert Hooke, from who he is and what he discovered, to his influence on modern science and manufacturing.

Irvine Springs is a spring manufacturer and supplier, and as you’ll soon find out, Hooke’s work has heavily influenced what we do. Without Robert Hooke, the spring industry would look very different- as would a lot of the scientific world.

Who Is Robert Hooke?

Robert Hooke was born on the 18th of July 1635 on the Isle of Wight. The 17th century was a period of scientific discovery, and he is one of several key figures to contribute to pivotal discussions in physics and biology. With peers such as Isaac Newton (who he corresponded with), Thomas Newcomen (who he also corresponded with) and Galileo Galilei (who he likely did not), Hooke was living and working in a time fuelled by theory, experimentation and innovation.

Not a lot is known about Hooke’s early life, outside of his education. He studied Experimental Science at Christ Church College, University of Oxford. While there he met Robert Boyle, a natural philosopher, and upon graduation he began working as his assistant, helping him to construct and operate the Boylean air pump.

He was a member of The Royal Society, then The Royal Society Of London For Improving Natural Knowledge, and it was through them that he conducted a lot of his experiments. He was the Curator by Office, a position which he held for life. Through the society, he met and interacted with a lot of individuals that we now recognise as key contributors to scientific thought.

What Did Robert Hooke Discover?

Hookie is most famous for his discovery of the Law of Elasticity. But what is the Law of Elasticity? The law states that the force needed to extend or compress a spring by some distance is proportional to that distance. He first introduced the law with a Latin anagram in 1660 and didn’t publish a solution until 1678. This was a common technique at the time, as it allowed him to take credit for his idea without sharing it. 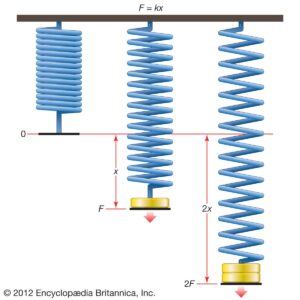 In mathematical terms, Hooke’s law is: F= -kX. F is the force applied to the spring (as strain or stress), X is the displacement of the spring and k is the spring constant.

While we’re interested in Hooke’s Law in this blog post, it is worth mentioning his other most notable achievement: his book, Micrographia. Published in 1665, it is the first ever illustrated text on microscopy, and the earliest observations of a microfungus.

Why Is Hooke’s Law Important?

Robert Hooke’s Law of Elasticity is the first record of its kind. His theory, from the 17th century, is still used today. The modern theory of elasticity is a more generalised version of his own. The theory outlines that the strain placed upon an object is proportional to the stress being applied.

His discovery inadvertently led to the creation of the very first watch. As part of his theoretical discovery, he developed the balance spring. A balance spring is a kind of flat torsion spring, which attaches to the balance wheel in a watch and causes it to oscillate. This is why it is also known as a clock spring.

It’s important to note that the invention of the clock spring is quite controversial. This is because, while it was Hooke’s original idea, it was Dutch scientist Christiaan Huygens who built the first wrist-watch using the clock spring.

Why Is Hooke’s Law Useful today?

Hooke’s Law is still used today! It has real life applications, many of which we actually use in the manufacturing industry. In just a minute, we’ll cover some real life examples of modern-day uses of Hooke’s Law.

Now in the 21st century, it is used in all branches of engineering, from manufacturing engineering to aerospace engineering. It informs complex disciplines such as seismology and molecular mechanics. And, most importantly for us, it is the fundamental principle behind the spring scale, the balance spring and the manometer.

Hooke’s Law is all around you, although you may not even realise it. His ideas on force, proportion and distance inform everyday objects and systems. Automotive suspension systems, watches and digital micromirror devices all apply his theory in some way or another.

Further examples, which are somewhat easier to comprehend, include:

As you can probably tell by now, Hooke led a really interesting and productive life. So to finish off this informative post, we wanted to share 15 facts about Robert Hooke that you may not have known.

So: who is Robert Hooke and what did he discover?

Our blog post has covered just parts of this famous scientific figure, and we hope that we’ve done him justice. Hooke was a brilliant physicist, whose ideas and inventions revolutionised the engineering industry and remain relevant today, over 3 centuries later.

Robert Hooke was an English physicist, amongst other things, and he discovered the Law of Elasticity, again, amongst other things. We hope you’ve found this post both interesting and useful. If you did, why not take a look at our previous blog post, “Top 2021 Manufacturing Trends To Watch This Year”.